Mobbing: Interview with a Psychologist 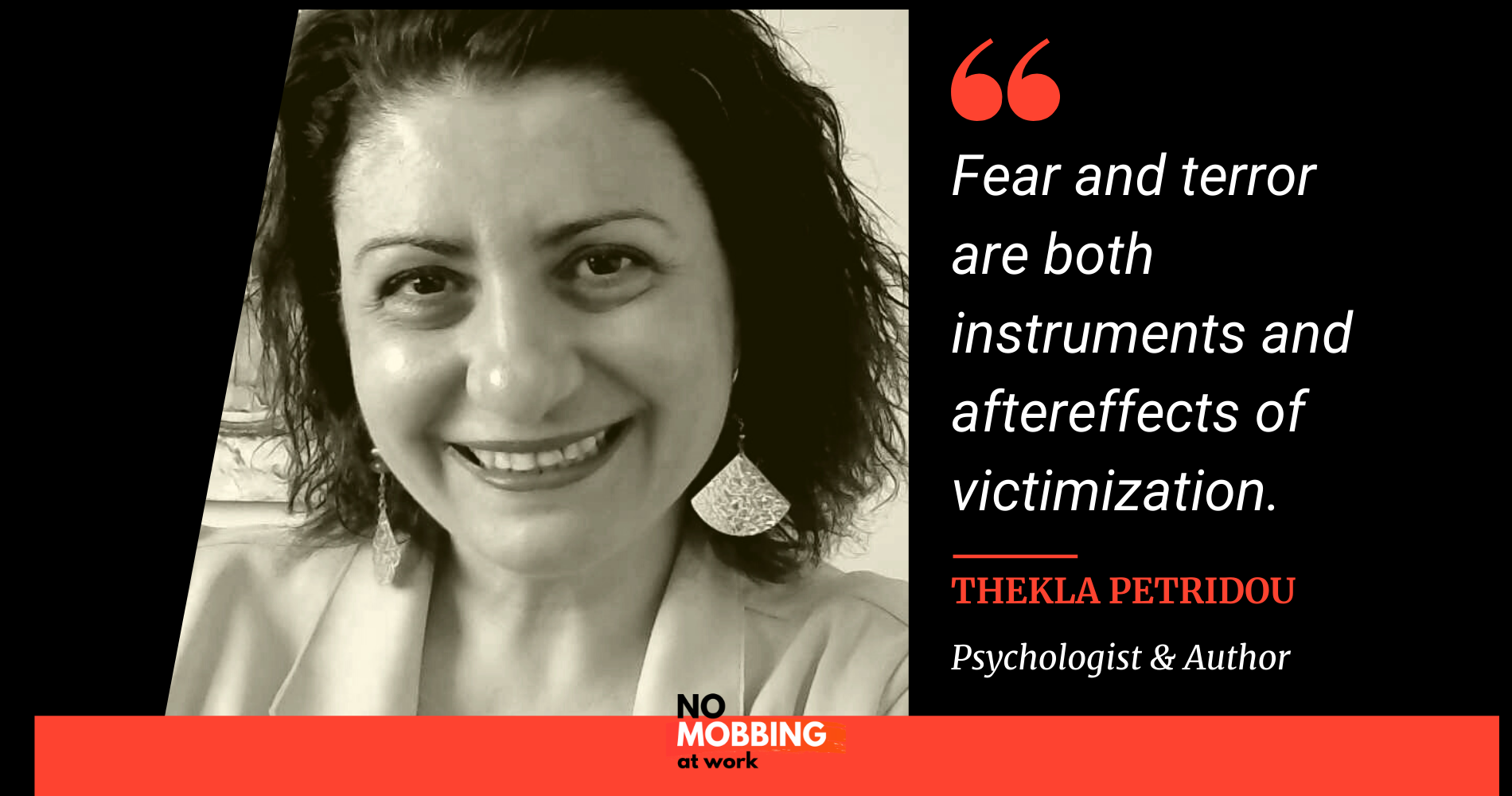 Mobbing: Interview with a Psychologist

Mrs. Thekla Petridou, psychologist and the author of the well-known book “Psychological War”, did us the honor of answering some of the most common questions when it comes to Mobbing, or in other words moral harassment.

Let us start with the tough questions. The most topical question raised by many people is “Why have not bullying victims spoken up sooner?”. Is there any scientific explanation for that?

Bullying victims, by definition, are having a hard time talking about what is happening to them. Fear and terror are both instruments and aftereffects of victimization. Workplace bulling victims worry that if they speak up, they will lose their jobs, their right and will probably face retaliative behaviors from their victimizer.

Fortunately, nowadays, social, and institutional awareness regarding those issues has started to be raised, which is something that encourages more and more victims to speak up. In no case should we re-victimize the victims by blaming them of not talking sooner. Let us blame our society, our institutions, and our tolerance towards psychological abuse, for not making it possible for a victim to find the courage and the social support to speak up!

In your opinion, what makes a person bully or harass a colleague? Is their a “profile” for the victimizer?

I can not have a particular diagnosis for every undiagnosed and disturbed person which molests the souls of other people. Undoubtedly, these are people who do not have the mental, intellectual nor emotional capacity to manage their own negative emotions without projecting them onto others in an abusive way. In my YouTube channel we use the term “undiagnosed” to talk about someone who uses “toxic” behavior in their relationship with other people, and, of course, if they were to be diagnosed by a psychiatrist or a psychologist, where they would be provided with specialized personality tests, they would end up with one or more personality disorders. However, being diagnosed with a personality disorder, is not an excuse for an abusive behavior. Personality disorders are related to the dysfunctional way with which some people interact with themselves and others around them, but this can not be an alibi for exercising abusing behaviors. The grayest area in the field of Psychopathology are personality disorders, because, in essence, they act as an umbrella term under which all the dysfunctional human characters are classified; some of them are diagnosis from Cluster B, like narcissistic personality disorder or antisocial personality disorder, which describe the egocentrism and the malice of certain people…

When it comes to Mobbing, we are aware that a key role also plays the colleagues who do not always instigate the harassment but are part of the “unofficial” bully team. Why someone resorts in such behaviors instead of standing up for the victim?

Humans are by nature cowards and tend to follow the pack. The passive observers are usually regular people, who do not have a cultivated soul, an intellectuality, and a courage to go against the current and to change the world. Few are the brave and courageous ones who open the path for the rest of us, and we are grateful to them. However, with the proper psychoeducation, even the most cowardly people may learn how not to tolerate abuse regardless of who is affected by it, either it is them or another person. Social solidarity and intellectuality are what we need as an antidote to psychological violence.

In your book “Psychological War”, you mention the term Gaslighting. Could you describe to us what it is and how it “applies” to the workplace?

Gaslighting is the weapon of the psychological war which refers to a conscious and planned strategy that the victimizer uses in order to convince the victim that they have lost their right mind and to make them believe they are “crazy”. It is a usual technique for manipulative individuals whose goal is to control other people’s minds and consequently to easily take advantage of them. In a work environment, gaslighting may occur in the form of constantly highlighting the mistakes of another co-worker, speaking to them in a way which implies that they have difficulties in comprehension, undermining them, and prescribing them as crazy. Also, in case the victimizer has an unofficial support team, as previously mentioned, the members of that team with their silence and tolerance contribute to declaring the victim as “crazy”.

What would you suggest to someone who feels weakened because of workplace bullying?

To seek for help immediately form a psychologist in order to empower themselves mentally and to fully comprehend what is happening to them and to find ways to cope with it. In big companies or organizations, where there is a human resources department, going there for help may be beneficial. But first and foremost, we should boost ourselves mentally with the help of a psychologist; to make it clear to ourselves that we are not “crazy”, and we are victims of workplace war or workplace bullying and to take care of ourselves and our position. If there is a work psychologist in the company or the organization, even better. After psychological empowerment, the victim will probably need to seek for legal advice as well. However, psychological support should come first.

Which are the indicative “signs” showing that a victim of workplace bullying should consult a qualified mental health professional?

All victims of workplace bullying should consult a psychologist or psychiatrist who deals with mobbing management. The most worrying signs are the victim’s decline in functionality, mood swings, feelings of depression and self-pity, high work stress, as well as sleep and eating disorders. However, reaching the point of complete mental deprivation should not be the waking point to ask for help. The sooner we act the better.

It is said that a person who has been harassed, usually faces alterations in their identity. What exactly does this mean?

The victim is possible to suffer from post-traumatic stress disorder, which, if the bullying situation continues, may evolve in complex post-traumatic stress disorder. It is a psychological state where someone stops being their usual self. They lose their optimism, their spontaneity and they present symptoms of stress and depression and, of course, they lose the carelessness they once had. You can find more on this issue by watching the following video with Dr. Grigoris Grigoriou.

To wrap things up, in a lighter perspective, how do you think can we, as employees, shield our mental health against such phenomena?

We should learn our rights as human, in general, but also when it comes to our workplace. To educate ourselves from accurate resources about mobbing. A source of information is the following playlist in my YouTube channel, where someone can find 24 videos regarding this subject.

Moreover, my book “Psychological War”, published by Psychogios, refers extensively to this phenomenon and the ways to deal with it. Apart from psychoeducation and learning about our human rights, it is important to live a life of self-knowledge. We should observe ourselves, our feelings, our thoughts or how we function in different environments, one being the workplace, and to be able to quickly detect the signs in case our rights are being violated and we are becoming victims of work harassment. There should be zero tolerance for degrading and abusive behaviors. This is our goal.

As we strive to be the best versions of ourselves, we should demand the same from the people around us. 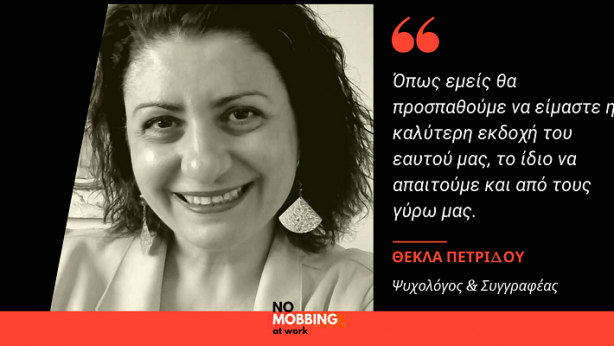